Really, Alicia?  Months and months of training, careful shoe and gear selection, lots of course studying, and then you forget to bring your race food to Switzerland?  Not a great start.  Fortunately I was saved by an East Asian market selling sticky rice flour.  Big cheer for globalization!

With the crisis averted, Divesh and I took the tourist train up to Schynige Platte to scope out support zone location and do some sightseeing.  Quality relaxation time!

The weather forecast has been confident all week that it will be raining and/or thunderstorming all day on Saturday.  Eeep.

It's intensely sunny and in the high 80s.  *Slight* difference to the prediction!  The race started off with about a mile uphill on the road.  My stretch goal had been to try to win, but when I saw another girl take off up the road at about 6:30 pace whilst looking like she was going for a casual jog, I realized it would be suicide to follow, so I stayed back and did my own thing. 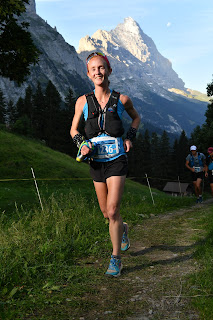 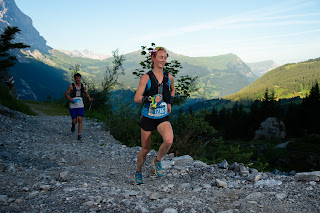 The first climb is not too steep and it's on very non-technical terrain, so you end up on the undulating section above Grosse Scheidegg (8km) relatively quickly.  Shortly thereafter, I ran into a roadblock:  cows.  There was a mother cow blocking most of the left side of the trail, a calf blocking most of the right, and not much room to go around on either side.  I stood around, considering my options and losing time rapidly, until I was saved by two friendly guys who told me to follow them.  "He's an animal doctor!" one of them announced, pointing to the other one.  It was an ideal little train to get behind, since we soon passed through several more cow sections and these guys definitely had their cow-dispersal technique mastered.

This whole section was very runnable and absolutely gorgeous. 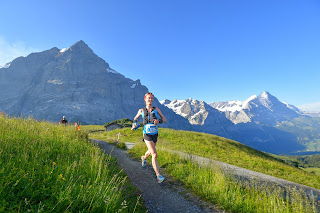 The main issue here though was that starting around 14km, we were catching up to the 100k runners and had to overtake maybe half of the 800-person field.  This wasn't so bad while we were on the easy wide trails, but around 18km we got onto narrow singletrack that would continue for most of the rest of the race.  The options for overtaking were either to lose loads of time waiting for a wide spot in the trail or to leap around the 100k'ers on the rocky edges of the trail.  I started off with the latter but after several close calls with my bad ankle, I ended up going more and more for the former.  It was demoralizing though, and I fought with myself (mostly unsuccessfully) to keep the negative thoughts from forming.  I settled on the strategy of giving myself the goal of saying "good job" to each of the 100k people that I passed, but given the altitude and my effort level, I think all I really said to them was "ggghhhhhh." 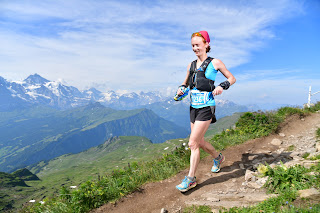 We passed the summit of the Faulhorn, with absolutely amazing views, and went down a much more technical way than we had come up.  There were two spots for glissading, though!!

From about kilometer 30 on, the race became really only about heat survival.  It was SO hot.  I don't think I thought about anything other than how thirsty I was for maybe 15 kilometers.  I ran by Divesh at 35k and got my sports drink refill, which did provide a bit of an energy boost, but shortly after this the trail went into the woods and turned into a steep, technical, and tree rooty affair.  The trees were trapping the humidity and it was like being stuck in the jungle.  Back to thinking only about how thirsty I was...

With 6km to go, we finally reached the valley floor and started the easy section back to Grindelwald.  This part is a very gradually uphill combination of bike path and road, so my main goal for the race was to put in a solid effort here, and I mostly achieved that.  I passed three naked men (not runners!), stuck my head in a cow trough of cold water, and tried to decide if I had heat stroke.  Just your average day at an ultra, basically.

The little mini vertical wall that you have to climb up to get to Grindelwald was especially brutal in the midday sun, but once that was done, it was just a fun downhill 400 meters to the finish.  I ended up in 2nd place, about 20 minutes slower than I was hoping to go, but the descent sections had been much more technical than I was expecting, and the heat had a definite impact.  It's a beautiful area and I would come back for sure, but for avoidance of traffic jam stress, I think the 100k, not the 50k, is the race to do here! 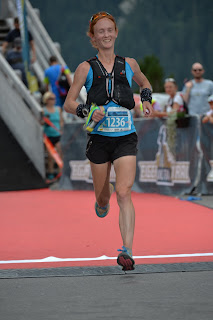 Posted by Alicia Hudelson at 4:30 AM