My road to Black Canyon was not a smooth one.  In mid-November, I was busy enjoying some newly-gained fitness (culminating in a big new marathon PR of 2:55!) when I put a minor tear in my hamstring tendon.  Apparently hamstrings don't like it when you keep them so tight that you can't even reach in the vague direction of your toes. I was able to start running again on December 21, but since I had taken the previous 6 weeks mostly off, I knew I was looking at a solid 6-12 weeks to regain all of the lost fitness.  Black Canyon was exactly 8 weeks away...

There were other bumps in the road too:  a mystery health problem which I discovered after the race to be hypothyroidism, the decision to go back to self-coaching, a tweak to the injured hamstring, and even a freak snowstorm which took over the trails on my last training weekend.  When Divesh and I arrived in AZ for the race, I felt like I was showing up for a car race in a battered old wreck that could barely survive the drive to the start line.


There was one benefit to this though, and that was that being super unready made slow but steady pacing my only viable option for running a decent race.  Black Canyon is a golden ticket race where there are two entries to Western States to be won, so I knew that plenty of people would start off too fast.  I resolved to hang back, run by heart rate at an effort level that I knew I could sustain for 100k, and hope that the race was long enough for me to start catching people before the end. 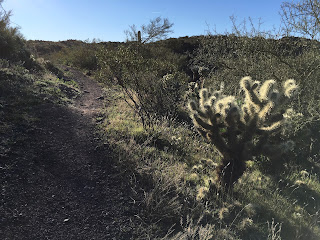 That is definitely easier said than done.  It took a lot of willpower to settle into the middle of the race pack during those first few miles, especially once we got onto nice singletrack--partly because it's hard not to want to run fast on good singletrack but also because the trail was very crowded and it was almost impossible to run at my ideal pace on both the uphills and the downhills.  I think I was 18th at the first aid station!  I just kept repeating to myself, "no racing until Black Canyon City [mile 37.4]," even as people passed me left and right. 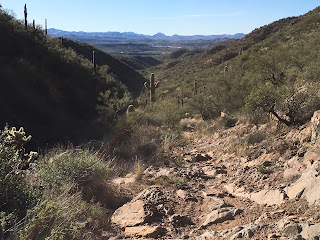 By mile 30, I could already tell that starting out slowly was going to pay off.  I didn't feel fast, but I did feel solid, in the sort of way where you can tell you're going to be more or less fine for the rest of the race.  I started to pass people but still mostly kept to my resolution to maintain my low HR--except for the few hundred meters after I ran past Jamil Coury, who was out on "active spectator duty" with a video camera.  I don't think there is any amount of discipline in the world that can keep you running a sensible pace whilst being chased with a video camera on a downhill! 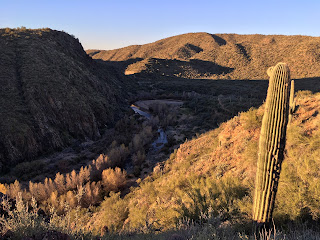 After passing Black Canyon City, I took the brakes off a little and started pushing on the long gradual uphills.  The heat was rough, but I was recovering a little at each river crossing, and I was pleased to find that the uphills were actually feeling pretty good. 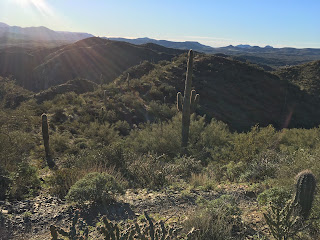 From miles 47-50 I had my only real struggle of the day.  I had been getting progressively thirstier for the previous couple of hours, and around mile 47 the thirst started feeling overwhelming--all I could think about was wanting ice water.  I was sort of expecting this to lead to a downward spiral in my pace and placing, but I surprised myself by pushing through it.  I saw Divesh at the mile 51 aid station and was reunited with another bottle of my sports drink; it wasn't cold, but it was for sure better than the empty bottle I'd been holding for the past few miles.  Divesh told me I was only a couple of minutes behind the 5th place woman.  We were just starting one of the race's longer climbs at that point, and it happened that that climb was where I had done a tempo portion of my last long run before the race.  "I can run this hill faster," I reminded myself, and it was enough to get my feet moving a little more quickly again.

After maybe a mile, I spotted the 5th place girl less than 30 seconds ahead--but she also spotted me.  She sped up and for the next 4 miles or so I would alternately get a little closer to her and then get dropped.  I was exhausted and thoroughly ready to be done running for the day, but it was also the most fun section of the whole race:  friendly racing with both of us still running strongly enough to be competitive.  At the top of the race's last climb, she zoomed off on an initially technical descent, and I figured I no longer had any hope of catching her.  But a mile or so into the descent, I came around a bend and suddenly saw her just ahead, with me rapidly gaining ground.

I contemplated hanging out behind her for a while to make sure that I really was capable of maintaining a faster pace all the way to the finish, but I realized that I actually felt GOOD.  As in, the fastest I had been all race.  I went past 5th place and shortly thereafter passed the next girl as well.  After that it was a fairly easy 3.5 miles to the finish.  I felt like I was flying the entire way, with energy to spare.  I've never had such a good last section of a longer ultra, and I hope there will be more to come like this one. 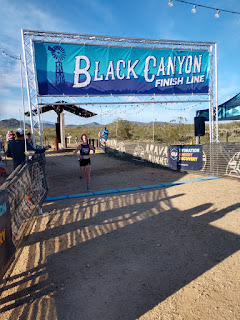 So I ended up 4th in 9:46, which turned out to be only one place away from a golden ticket after one rolled down a place.  But given that I figured top 10 would be a stretch based on my fitness going into the race, I am completely thrilled with this.  In fact, it's possible that I'm the happiest occupant of the "tough luck spot" in golden ticket history.  And since learning about my hypothyroid situation explains the symptoms I've been struggling with when running, I'm optimistic that I can sort those out by the summer and still have a strong season of mountain racing.

It was a rough post-race evening for me; although my stomach had behaved perfectly the entire race, I promptly threw up after starting my rehydration a little too enthusiastically with the finish line lemonade.  Diluted apple juice went down a little better, but I still had to make Divesh pull over a few times on the way back to the Airbnb.  It did make me smile remembering my friend Nick and I simul-vomiting over a wall in a layby while my friend Dave drove us home from the Highland Fling.

Oh, and total calories I consumed during the 100k?  150.  And my best miles of the day were the last five.  Hurrah for nutrition research!

Posted by Alicia Hudelson at 5:18 AM